It’s the final day of our trip here in Alpe d’Huez. We’re leaving mid-afternoon to start the six hour journey back to the Haute-Garonne. Although Therese at the Chalet Solneige has kindly offered to ‘babysit’ Monty for us, I’ve decided not to ski. Monty and I are going up on the slopes to check out the selection of walking trails, whilst my husband skis.

The weather’s glorious. The thin layer of high level cloud that marked the start of the day has disappeared by 9am, and the sun is striking sparkles off the snow. At Vaujany, I buy a pedestrian pass that will give me access to the ski lift. There are several tiers of pass, depending on how far into the network of lifts I want to go, and I settle for the second cheapest at around 11 euros, which gives me access as far as the Dôme des Petites Rousses at 2800 metres. 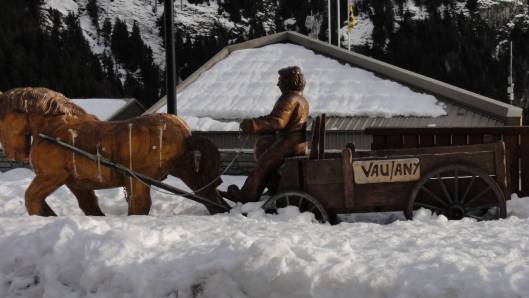 Still in the valley, at Vaujany

The platform of the lift is made from a metal grille, and Monty’s not too keen on walking on a surface that he can see the ground through. However, he hops onto the lift happily enough, and we squeeze into a corner away from stray ski poles and boots.

As we emerge from the lift at the other end, the walking paths are clearly marked. In a few seconds, we leave the lift and skiers behind, and we’re out in what feels like the middle of nowhere. 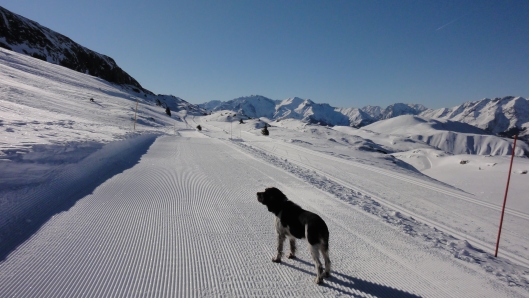 Ooooh - this snow's cold on the paws!

Although it’s not particularly early, we’re the first ones out on the trail. The neatly-pisted path is softer than it looks, and my boots dig in a little. The snow builds up on Monty’s feathers, and we stop a couple of times to pull the ice balls from his legs.

There’s no-one else in sight apart from a couple of cross-country skiers in the distance, and I let Monty off the lead. He scampers about happily, kicking up little plumes of fresh snow then galloping through them. There’s a boucle, or circular path, that runs round a frozen lake, but we don’t have time to do it as we’re meeting the skiing half of the party. Having reached the crest of the hill, we turn round and head back to the lift.

There are people behind us on the path now, wearing snowshoes and cross-country skis. Monty is nonplussed by the snick snack of the snowshoes, and the swisha swoosha of the skis, and retreats behind my legs. He can’t work out how the skiers are moving, and gives a series of surprised yelps whenever we meet one. 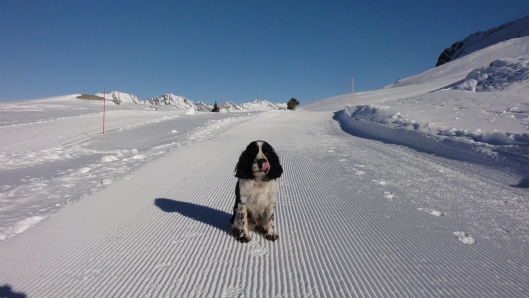 Back at the Auberge de l’Alpette, Monty enjoys the specialité de la maison for canine customers – a bowl of (chilled) water. 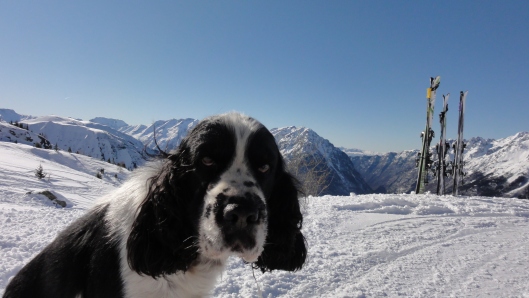 Eyeing up the slopes outside the restaurant.

After lunch, we take the next lift up to the Dôme des Petites Rousses, to see the views. 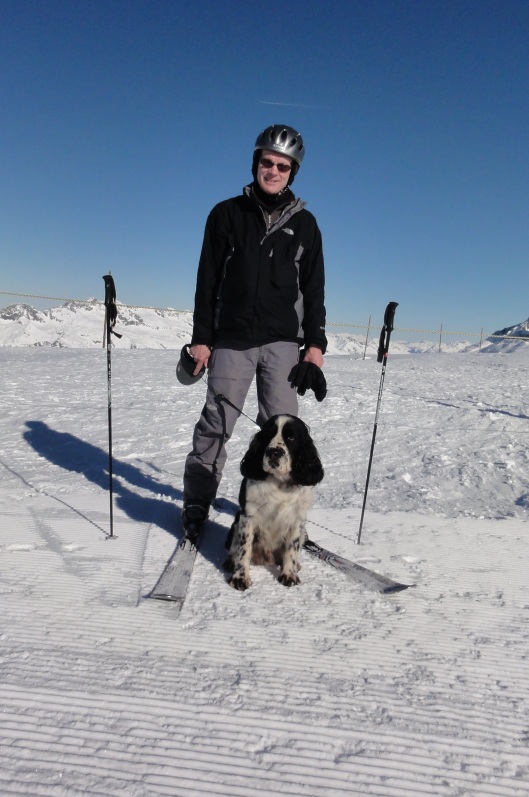 After Monty’s photoshoot, we head back down to the Alpette lift for another hour’s walking along a different path, before taking the lift back to Vaujany.

Back in the resort, Monty successfully pulls his ‘I’m-absolutely-starving-look-you-can-see-my ribs-if-you-look-really-hard’ act on a group of dog-loving Brits, who kindly share the ham from their sandwiches.

What with the ham and the snowy walks, the whole of our six hour journey home is punctuated by the sound of snuffly spaniel snores from the back.

The snow in the Pyrenees is still disappointing, so my husband (the skiing nut) masterminds a short trip over to Alpe d’Huez, a bustling ski resort near Grenoble. We pile skis, clothing, equipment and a slightly bemused spaniel into the car, and head off on the six hour journey from our house in Gascony.

On the way, we pass through Montpellier where the temperature is a mild and sunny 19 degrees. It’s hard to believe that in a few hours time we’ll be in a ski resort.

The chalet we’ve chosen is outside Alpe d’Huez, in a pretty satellite village called Pourchery. The chalet, the Solneige, is run by a lovely Dutch couple, Therese and Pieter. We’ve chosen it partly as the owners have their own resident dog, a sweet Golden Retriever named Yara, and they’re laid back about us leaving Monty in the room whilst we ski. Therese even offers to walk Monty for us during the day. 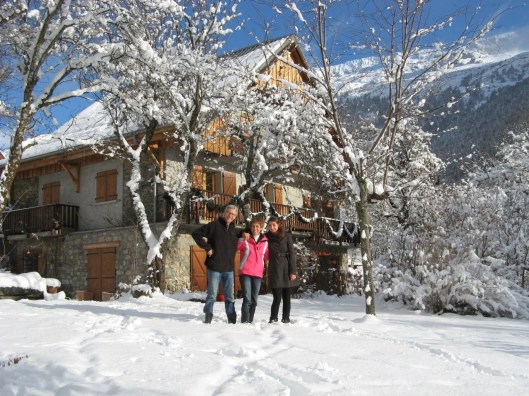 Pieter, Therese and daughter Karin outside the Chalet Solneige.

We all (including Monty) feel we’ve landed on our feet with our accommodation. Therese and Pieter are the perfect hosts, attentive without being intrusive. It’s hard to believe that they’ve only been running the place for a year, and had no previous experience in the hospitality industry. The meals are delicious and not too rich; my vegetarian options for the week include a homemade burger and a corn and mushroom casserole in white wine and cream. As the chalet isn’t full, Monty is allowed into the main living area – although Pieter does point out that this is subject to the other guests’ agreement. At the end of the visit, Monty’s taken quite a shine to Yara and is reluctant to leave her – well, gentlemen do prefer blondes. 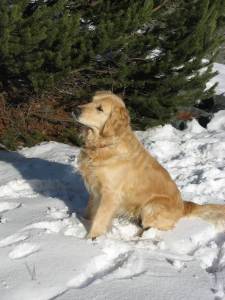 On the first day of skiing we tackle a range of slopes, including the famous black run Sarenne, said to be the longest run in the whole of the Alps. There’s plenty of snow, but we’re both finding it hard work. The runs we’ve chosen feature my personal least-favourite snow conditions – mounds of soft snow over ice. The top of the black run is scraped into moguls, and my legs are aching when we reach the bottom. I decline my husband’s kind offer to go back and try it again. We’re both exhausted when it’s time to leave the slopes, and we’ve still got to take Monty out for an hour’s walk. 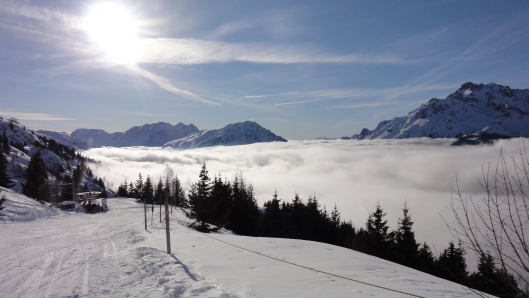 Looking down into a 'lake of clouds'

On the second day, we’re feeling a little unenthusiastic, but the day goes well. The weather’s bright and sunny, and the thin layer of cloud that marred the lower slopes the day before has gone. Either the slopes are better pisted today, or I’m feeling stronger, and the skiing’s fast and smooth. 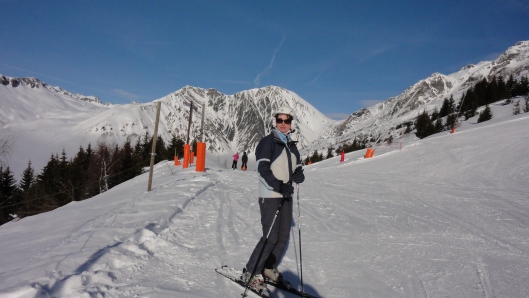 Up on the slopes - and the sun's shining!

A brief stop for lunch sees us at the Auberge d’Alpette, halfway down the green Carrelet slope. As we come off the slope and ski behind the restaurant, I misjudge the steepness of the corner and almost make a spectacular entrance amid the menu du jour.

We chose the restaurant thanks to a positive review in the Where to Ski and Snowboard Guide – and it’s justified. Our lunch of vegetable soup and crêpe with cheese and spinach arrives quickly and is delicious. 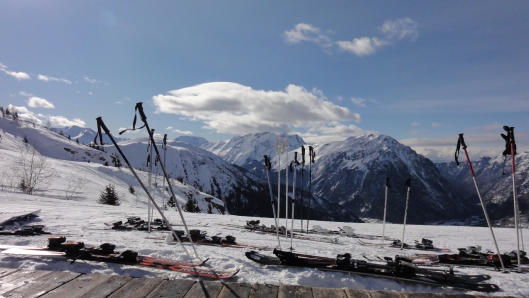 The view from the Auberge d'Alpette.

At the end of the day, we ski down the black La Fare run and take the cable car back up to Vaujany, where we’ve parked the car for the five minute drive back to the chalet. Monty’s there giving us ‘spaniel eyes’, so it’s off with the ski clothes and on with the walking boots. At least we’ve got the thought of Pieter’s delicious four course dinner to look forward to. 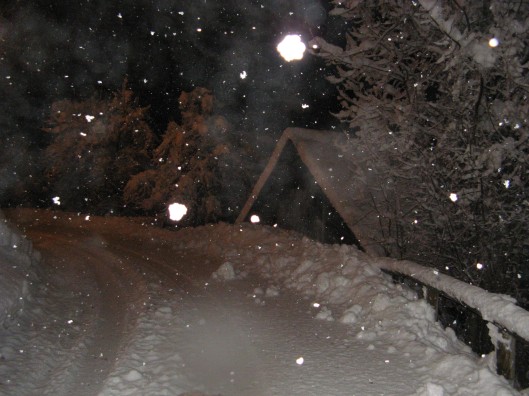 Snowfall at the Chalet Solneige

Today we decide to take advantage of the clear weather forecast in the mountains, and head off to the Pyrenees for the first skiing of the season. St. Lary (more formally known as St. Lary Soulan) is a nice little town, with lots to offer all year round. Their town symbol is the Pyrenean Mountain Dog, locally known as the patou, and the dog logo appears everywhere from piste maps to lifts. They’re recently invested heavily in their ski facilities, and have installed a brand new télécabine, or cable car, along with parking for 280 cars. This makes the whole experience very smooth, as we’re able to drive to the town, park, and take the lift up to the slopes. 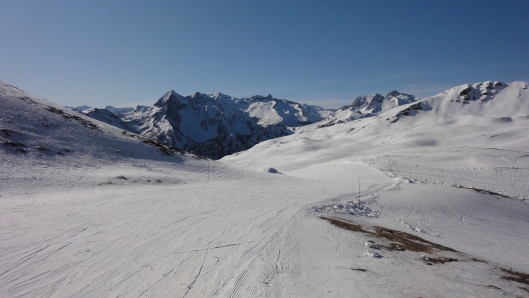 Occasionally, we’ll take Monty with us to St. Lary, and take it in turns to ski. Pedestrians can get a half price ticket on the cable car, and there are several nice walking paths at the top. Spaniels travel free on the cable car, although Monty’s never very keen to get on as he doesn’t like the moving surface. As an alternative, we sometimes book him in for the day at the kennels at Fronsac, La Bonne Patte. French kennels can be a little hit and miss, but this one is very nice and run by a lovely and knowledgeable French lady. On his last visit, Monty fell in love with Daisy, an English Springer in the adjoining run, and didn’t want to leave. Today, as we’re only planning to be away a few hours, we’ve left him at home, happily toasting his tummy against the radiator and listening to Classic FM over the internet.

An hour and forty-five minutes after leaving home, we’re on the slopes. We have Altiski passes, which cover us for several resorts in the area, and are automatically debited, so there’s no need to queue for passes. There’s been no snow here for a month, so our expectations aren’t high. Some of the runs are closed (mostly the ones with no snow cannons), but most are open. The snow’s hard and icy, but better than we’d feared. St. Lary consists of three small ski areas – St. Lary 1700, St. Lary 1900 and St. Lary 2400 – and you can cover all three very comfortably in a day.

We lunch at Les Trois Guides, an attractive mountain restaurant in the 1900 area. The resident restaurant dog, a shaggy grey and white crossbreed, sidles up to each newly served table with an ingratiating grin, but turns up his nose at my salade au chèvre.

We put in another good hour after lunch, and spend some time playing on our favourite run, the black Terranère in the 1900 area. However, by half three it’s starting to get icy again, and my skis crunch and rasp over the unyielding surface every time I attempt one of my inelegant turns. It’s time to pack up and go back down in the cable car.

Back home, Monty is fast asleep and snoring.